The Fibonacci Calculator is powered by Investing.com

Leonardo Pisano is better known by his nickname Fibonacci (1170 1240). Born in Pisa Italy and was considered to be the most talented Western mathematician of the middle ages. While working on a problem involving the growth of a population of rabbits led to the discovery of Fibonacci sequence numbers for which Fibonacci is best remembered today.

What is Fibonacci sequence Numbers?

The Fibonacci sequence is one of the most famous formulas in mathematics. 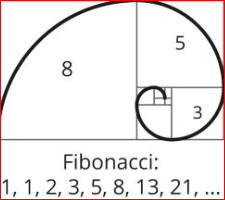 Fibonacci discovered that there was a relationship with adding numbers together and then the dividing relationship came up with repetitive percentage figures. This was called the Fibonacci summation or “series” numbers.

Fibonacci Retracement aka Correction - Fibonacci Retracement levels are a component of technical analysis that can assist traders in analyzing and trading market trends and channels. When used to help identify pullbacks and price reversals, Fibonacci Retracements rely on calculated levels to provide insight when a market makes a move from a low to a high, price will have a tendency to pullback, retrace or correct. The percentage of the pullback can be .382%, .50%, .618%, .786% and at times even 100%. The ratios form the basis determines the size of the retracement. 38.2% is considered shallow and 62.8% is considered deeper, while a 50% retracement is considered medium. These three levels or zones serve as alerts for the trader to watch for possible areas of price resuming its previous trend.

Fibonacci extensions - There are times when a pullback can retrace beyond the original starting point and exceed 100 percent of the initial wave or trend. So a Fibonacci extension is essentially a correction that exceeds the low of the initial trend. Technicians will use the 100 percent, 1.272 percent and 1.618 percent ratios to target a pullback level. This state of correction can be considered a double bottom at the 100 percent pullback level, and when we see that correction exceed the low point. By using the extension tool you may have a great place to place your stops and keep them out of harm's way by using the “hidden” or invisible support level as determined by the Fibonacci extension technique.